This has been one crazy ride in operating The Nocturnal Aesthetic. I've loved every minute of it. However, due to a certain relentless Tea Muse, I am saying good-bye to this blog. Thank you to those who have kept up with it and thank you for being a part of the ride. 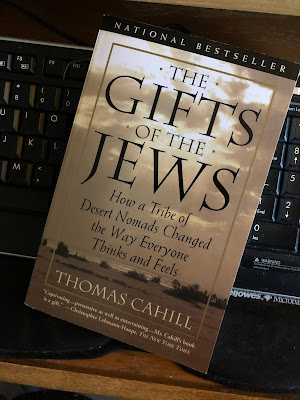 Sorry I haven't been as regular on this blog but holidays, Life changes, and a Tea Muse who is demanding can take up your time. But . . . I'm BACK!

Judaism has been a part of my life and I didn't realize it. When I was younger, my mother used to play Hanukkah songs as we decorated the Christmas tree (I was raised Roman Catholic). I had and still have many Jewish friends, attended Jewish festivals, ate more than my fair share of Jewish food, studied the Torah in university, listened to my mother tell me stories of how she used to live in a Jewish neighborhood in New York, visited the Holocaust Museum in Washington DC and vowed never to go back, read The Rise and Fall of the Third Reich in two weeks and wondered WHY, finally watched Schindler's List and cried through half of it, and so on. Yet, with all of these things, I merely lived my life and treated my interest as nothing than that. Recently, I made a new guy friend who told me that he was Jewish. When he said that, something stirred deep within me. I couldn't explain the feeling, only that SOMETHING had awakened. After some time had passed, I reached out to a friend for advice, to which she suggested that I speak with a Rabbi. I've now visited a Reform Jewish synagogue (Temple Israel in Memphis) for Shabbat three times now and I finished reading the book The Gifts of the Jews by Thomas Cahill - a gift from my guy friend (much thanks!)

This book should be a must read for anyone who enjoys a good story and for those who want to understand how a group of people made such an impact on the world. The stories Cahill writes about are well known - Abraham ready to sacrifice his son for God, Moses leading his people out of Egypt toward the Promised Land, David felling the giant Goliath with one stone, the creation of the Ten Commandments, and so on. Yet, Cahill presents these stories with a new viewpoint - we are called to see these stories with new eyes and a better understanding of how this group of people followed a Voice that chose them. We see that while other religions are of a cyclical nature, Judaism is linear (as my guy friend told me). One long line of history shaped by perseverance, doubt, fear, strength, and a desire in knowing that there was something different out there for them. All of these things helped shape the Western World into what it is now and at the core of it all, Jews continue and press on.

I asked my guy friend several times why people hated the Jews so much, knowing that there really wasn't an answer for it except fear and ignorance. Every time I attend Shabbat, I read the songs and prayers and listen to the songs being sung and still wonder WHY. Then again, as a black woman living in Memphis, the same could be asked for why people hate my race. I know that there are people in this world who hate me without ever having met and getting to know me. However, what I have to remember is that the only thing I can do is live my life and be an example. That's what I feel the Jews do - they set an example. Last night, the Rabbi advised that despair was not a Jewish thing. After reading Cahill's book, I can see why.


Posted by Kimberly B. Richardson at 9:07 AM No comments: